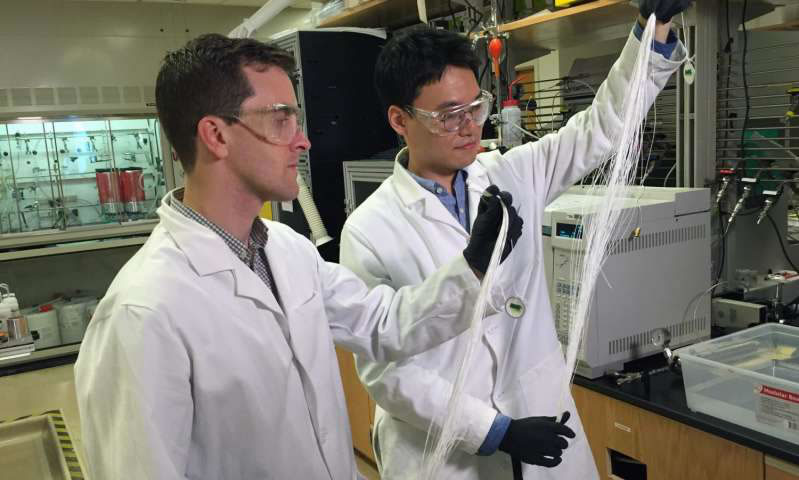 A research team from the Georgia Institute of Technology and ExxonMobil has demonstrated a new carbon-based molecular sieve membrane that could dramatically reduce the energy required to separate a class of hydrocarbon molecules known as alkyl aromatics.

The new material is based on polymer hollow fibers treated to retain their structure - and pore sizes - as they are converted to carbon through pyrolysis. The carbon membranes are then used in a new "organic solvent reverse osmosis" (OSRO) process in which pressure is applied to effect the separation without requiring a phase change in the chemical mixture.

The hollow carbon fibers, bundled together into modules, can separate molecules whose sizes differ by a fraction of a nanometer while providing processing rates superior to those of existing molecular sieve zeolites. Because it uses a commercial polymer precursor, the researchers believe the new membrane has potential for commercialization and integration into industrial chemical separation processes. The research will be reported in the August 19 issue of the journal Science.

Separation is currently achieved through refining processes such as crystallization and adsorption with distillation, which are energy-intensive. Globally, the amount of energy used in conventional separation processes for alkyl aromatics is equal to that produced by about 20 average-sized power plants.

"We see this as a potentially disruptive technology in the way we separate xylenes and similar organic compounds," said Benjamin McCool, one of the paper's co-authors and an advanced research associate at ExxonMobil Corporate Strategic Research in Annandale, N.J. "If we can make this work on an industrial scale, it could dramatically reduce the energy required by these separation processes."

Fabrication of the new membrane material begins with hollow polymer fibers approximately 200 microns in diameter, slightly thicker than the average human hair. The fibers have pore sizes of less than one nanometer, and are treated via cross-linking before they are converted to carbon through a pyrolysis process. The pore sizes of the fibers can be adjusted during the fabrication process.

"We take a scalable platform based on polymeric membranes and then turn those materials into inorganic molecular sieves," explained Ryan Lively, an assistant professor in Georgia Tech's School of Chemical & Biomolecular Engineering and the paper's corresponding author. "Our membranes are mechanically robust and they can withstand the process conditions required by OSRO. They maintain advantageous mechanical properties and membrane performance as they are converted to carbon fiber."

Lively and postdoctoral fellow Dong-Yeun Koh used the OSRO process in the laboratory to separate mixtures of para-xylene and ortho-xylene, molecules whose sizes differ by one-tenth of a nanometer. By applying pressure at room temperature, the membrane can convert the 50-50 mixture to an 85-15 mixture at a high flux relative to zeolite membranes.

"These molecules have incredibly similar sizes and properties, but the membranes can tell them apart," said Lively. "This bulk cut of the mixture greatly enhances the concentration with a very low energy input. This mixture could then be fed into a conventional thermal process for finishing, which would reduce the total energy input dramatically."

In industrial use, the membranes would be bundled together in modules that would be used in chemical facilities. "In practice, you would get as many modules as you needed for a particular application, and if the need increased, you could simply add more modules," Lively said. "It would be totally scalable." 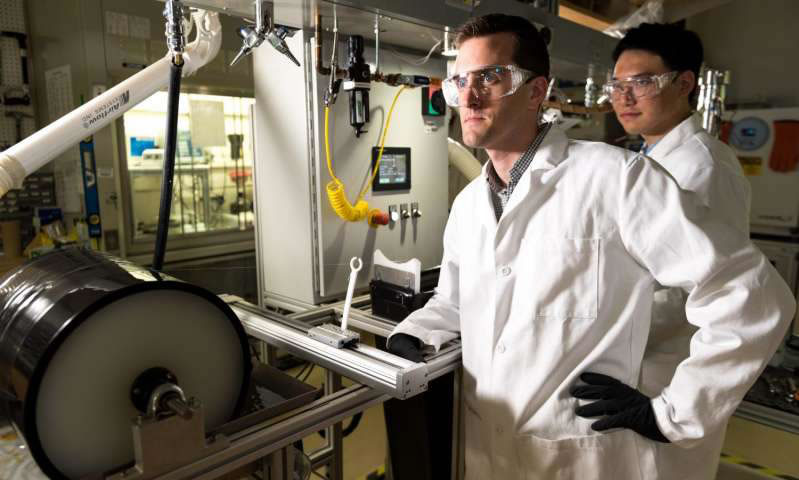 Reverse osmosis membranes are already widely used in desalination to produce drinking water from saltwater, consuming a fraction of the energy required by thermally-driven process. Carbon fiber membranes are being used for gas separations, but the new OSRO process is believed to be the first use of reverse osmosis with carbon membranes to separate liquid hydrocarbons.

Though the membrane has demonstrated promising results, it still faces a number of challenges. The membranes will have to be tested with more difficult separations before they can be considered for commercialization and scale-up. Industrial mixtures normally contain multiple different organic compounds, and they may include materials that can foul membrane systems. The researchers will also have to learn to make the material consistently and demonstrate that it can withstand long-term industrial use.

"Because we are starting with commercially-available polymers and we are using commercial-type equipment, we can see a clear line-of-sight to commercialization with this technology," McCool said. "It's a big advantage that the membranes are being spun on a hollow-fiber line similar to that currently used in the industry. The time horizon to make this happen and the cost of production could be highly advantaged over other inorganic systems or more exotic materials like graphene."

Development of the OSRO process resulted from a collaborative process in which Georgia Tech researchers worked closely with ExxonMobil scientists - including McCool and scientist Harry Deckman - to identify and overcome the challenges of industrial processing.

"ExxonMobil is a leader in its commitment to fundamental science," said Mike Kerby, ExxonMobil Corporate Strategic Research manager. "As part of our commitment, we continue to widen our research aperture through collaborations with academic research institutions to better enable us to identify potential breakthrough technologies to reduce greenhouse gas emissions, increase energy supplies and realize other environmental benefits."

上一条：Sign the PO with Russia client 下一条：EID-Al-Adha, EID Mubarak all my friends and there family